However, when the lesson is over, students will often face Chinese characters which are usually pre-designed fonts. There are many Chinese fonts both online and in print. And it is a good idea to recognise some of the common Chinese fonts. We shall see that the same character can look slightly different in different Chinese fonts.

Six Common Chinese Fonts You Should Know about

Sim Sun is the number one widely used Chinese font. Its popularity is largely due to the fact that it is the default Chinese input font in Windows.

Song Ti is probably the earliest Chinese font used in China, tracing back to the Song Dynasty (960-1279) when printing technology was flourishing. Song Ti itself has gone through quite some changes. There are different versions of Song Ti, designed and supported by different platforms. Sim Sun, as a relatively late coming Chinese font, literally means a new version of Song Ti.

Hei Ti is another Chinese font which is widely used. I would use Hei Ti if I want a “bold” effect for my Chinese texts. It is said that Hei Ti has been around since 1900s.

MS Ya Hei is a new version of Hei Ti. It is said that MS Ya Hei is pre-installed in Windows 7 and the later versions, and that has made MS Ya Hei a popular Chinese font.

Kai Ti is a nice looking Chinese font imitating brush strokes. This is the font used in the Chinese Reading and Writing series.

Fang Song Ti is a hybrid of Song Ti and some brush stroke techniques. It is mentioned here because many people like this Chinese font, considering it a good model for people to improve their handwritings.

Comparison of These Six Chinese Fonts

With some brief introduction of these six Chinese fonts, we can take a look at what each Chinese font looks like and how different they render Chinese characters. The picture below gives a quick glance at these Chinese fonts. 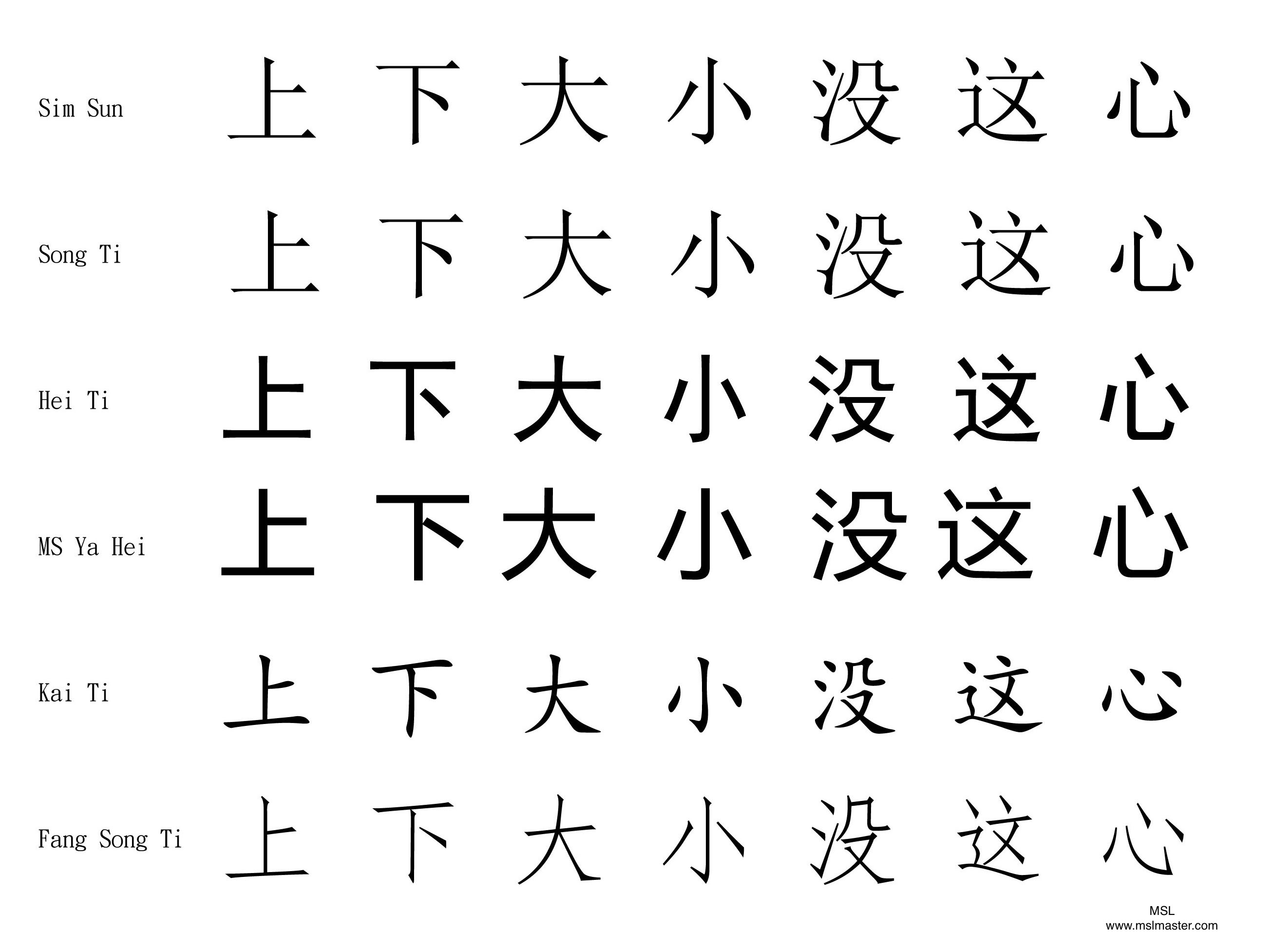 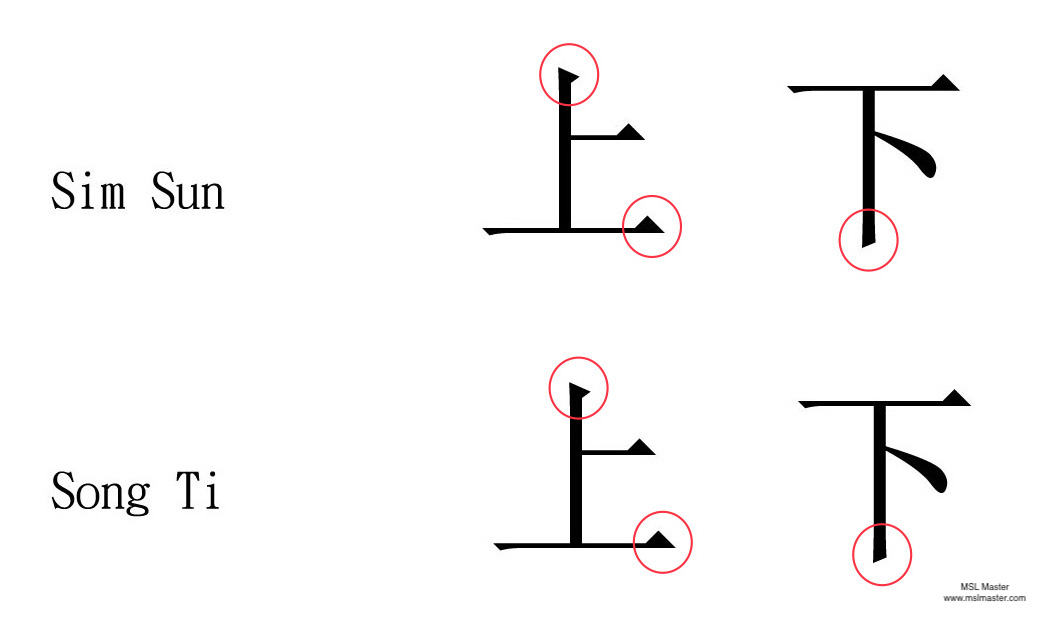 The reason that the most popular Chinese fonts, Sim Sun, did not make into the Chinese Reading and Writing series is its aesthetic rendition of strokes, especially the spiked ending of the horizontal strokes. It looks very nice in print, but will confuse beginner students. It’s very hard for students to produce the same effect with their pen or pencil.

Also, in this picture, you can’t really tell the difference between Sim Sum and Song Ti, can you? I can’t either. But in theory, Song Ti’s vertical stroke is much thicker than the horizontal strokes.

Let’s take a look at Hei Ti and MS Ya Hei. 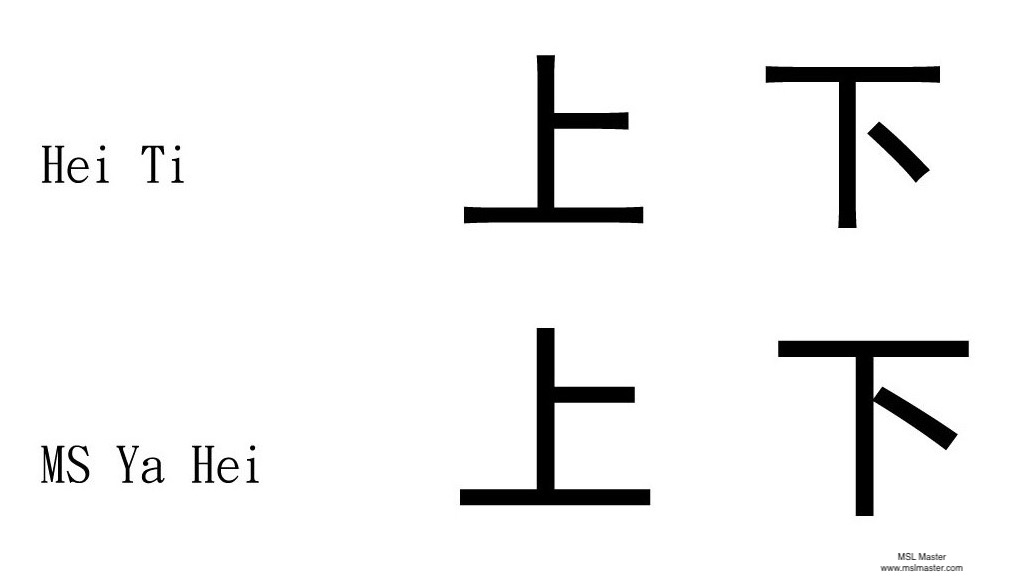 The Hei Ti family presents blocks of strokes with equal thickness. The beginning of the strokes is the same as the ending. There is no difference between the horizontal strokes and the vertical strokes.

The next is Kai Ti and Fang Song Ti. 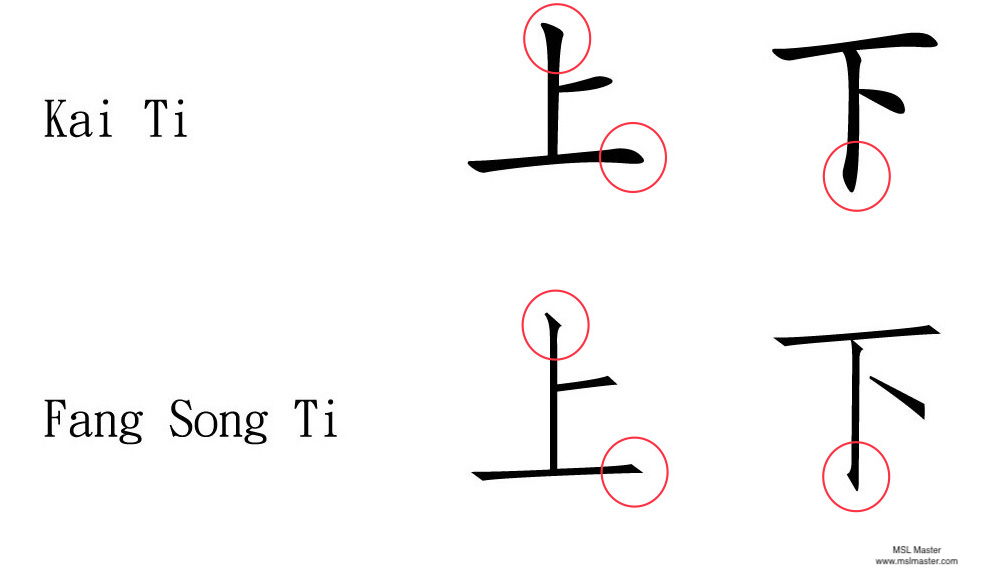 Kai Ti follows the effect of brush calligraphy. With a brush, it is quite true to say that we draw Chinese characters. From this picture, we can see that Fang Song Ti has adopted some of the Kai Ti’s feature, and we can also recognise Fang Song Ti’s resemblance to Song Ti. 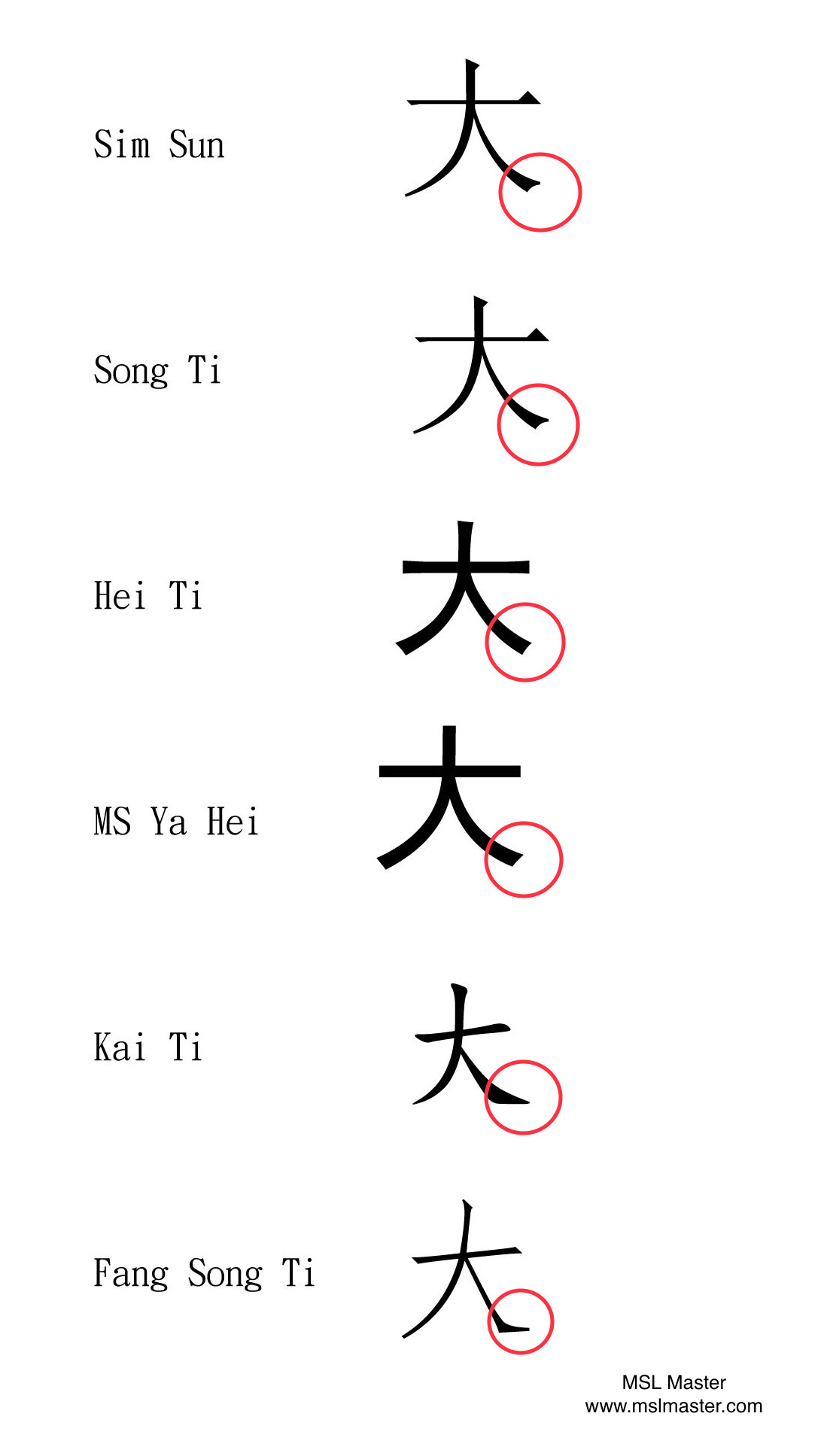 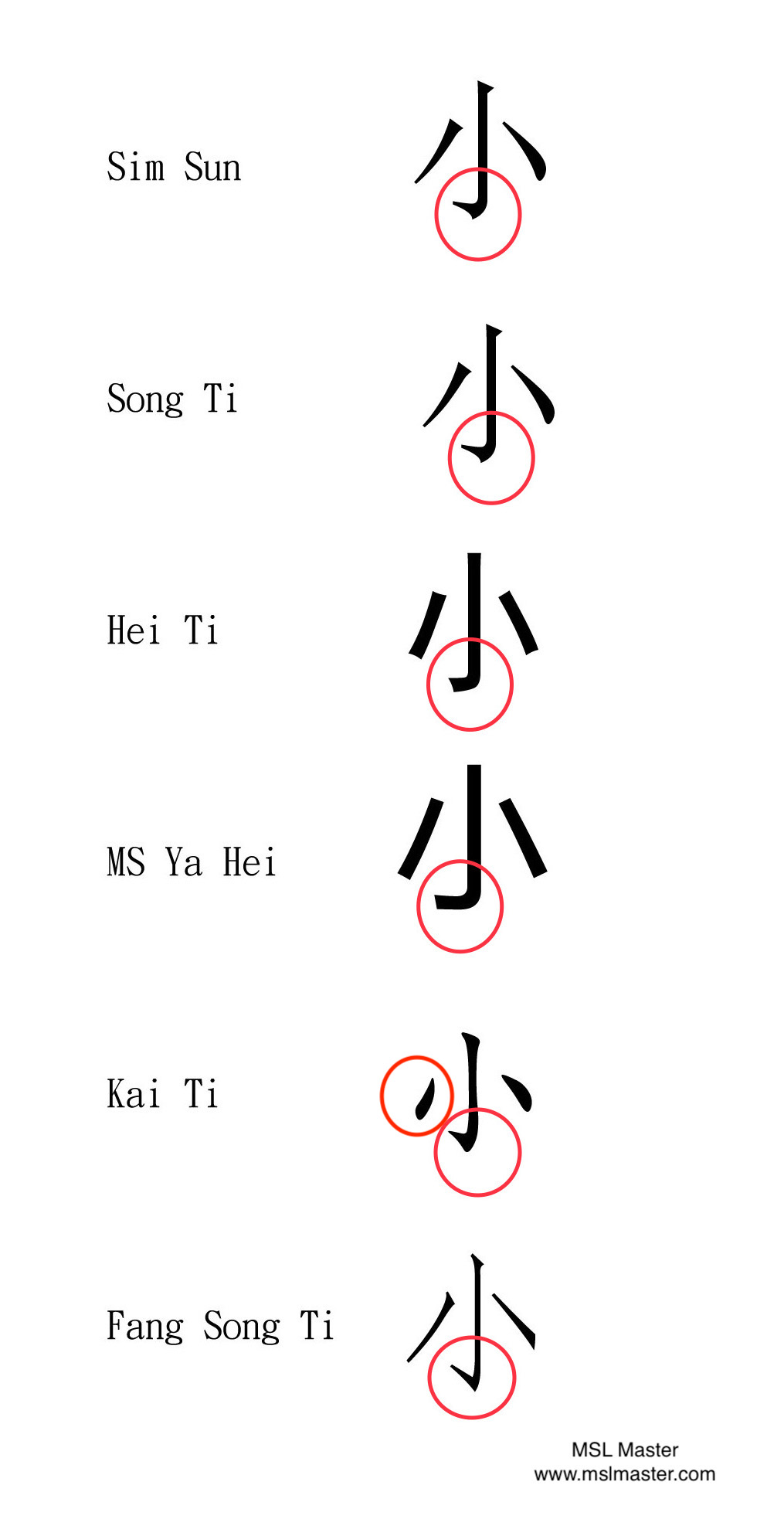 This picture shows the difference between the left-dots and right-dots. Also, pay attention to the hooks. The Hei Ti family continues to use blocks of ink for a hook, which does not look like a hook anymore. This is the reason that Hei Ti did not make into the Chinese Reading and Writing series. The rest of Chinese fonts all present a nice looking hook. 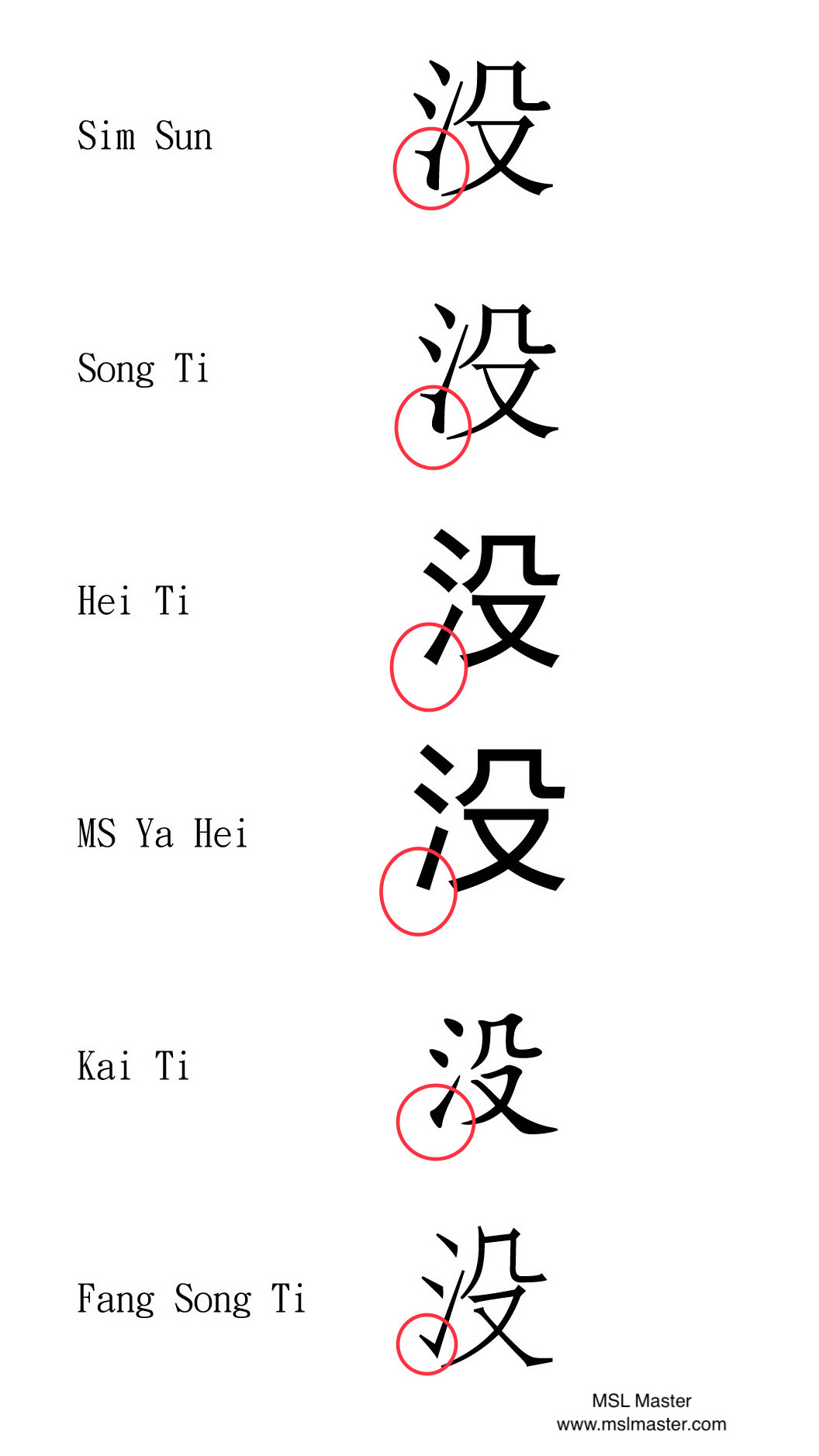 This picture shows us the difference between rising strokes. In Fang Song Ti, the rising stroke looks like a tick, and this is the reason that Fang Song Ti did not make into the Chinese Reading and Writing series.

By now you have probably understand why Kai Ti is used in The Chinese Reading and Writing series. Technically, it gives the smoothest strokes. And it is also aesthetically pleasing.

Our comparison is not over yet. Take a look at this picture. 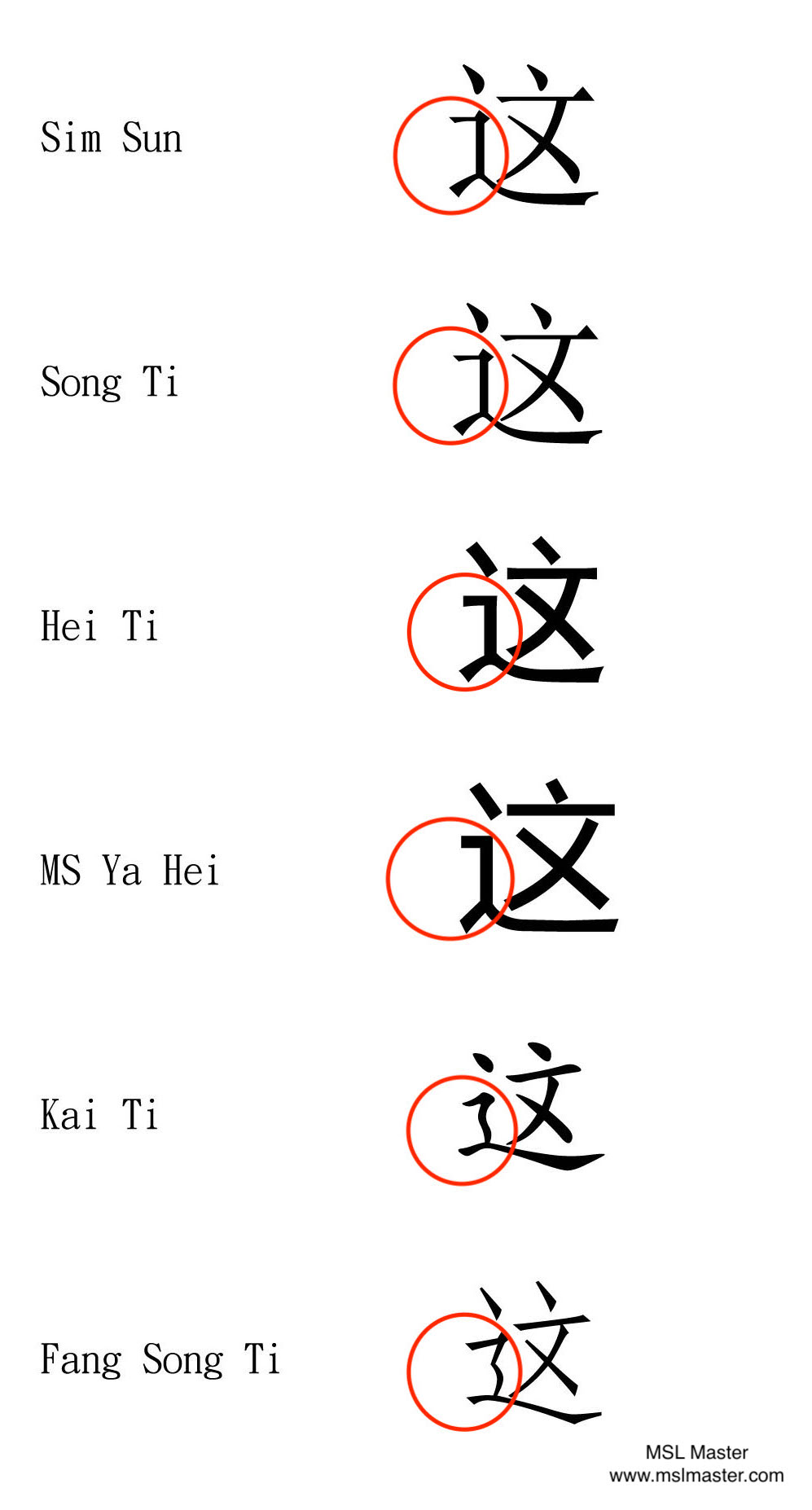 This picture shows a major difference between Chinese fonts. In the Song Ti family and the Hei Ti family,  the curved and turned stroke is greatly simplified to a straight line, while both Kai Ti and Fang Song Ti present it well. 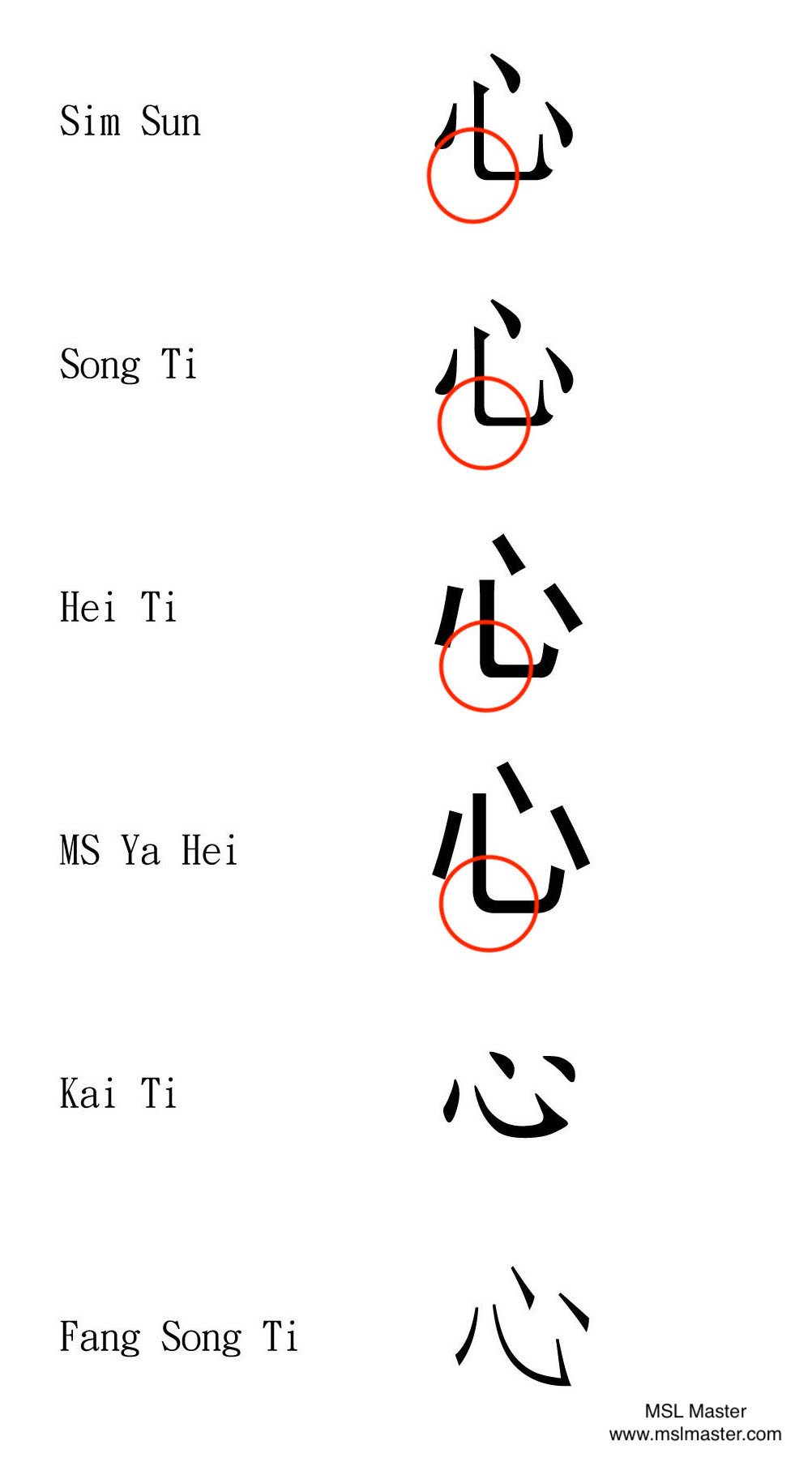 This is another difference. In the Song Ti family and the Hei Ti family, the bottom stroke of 心 is changed from a 卧钩 (wo gou) to a 竖弯钩 (shu wan gou). Both Kai Ti and Fang Song Ti have kept it. 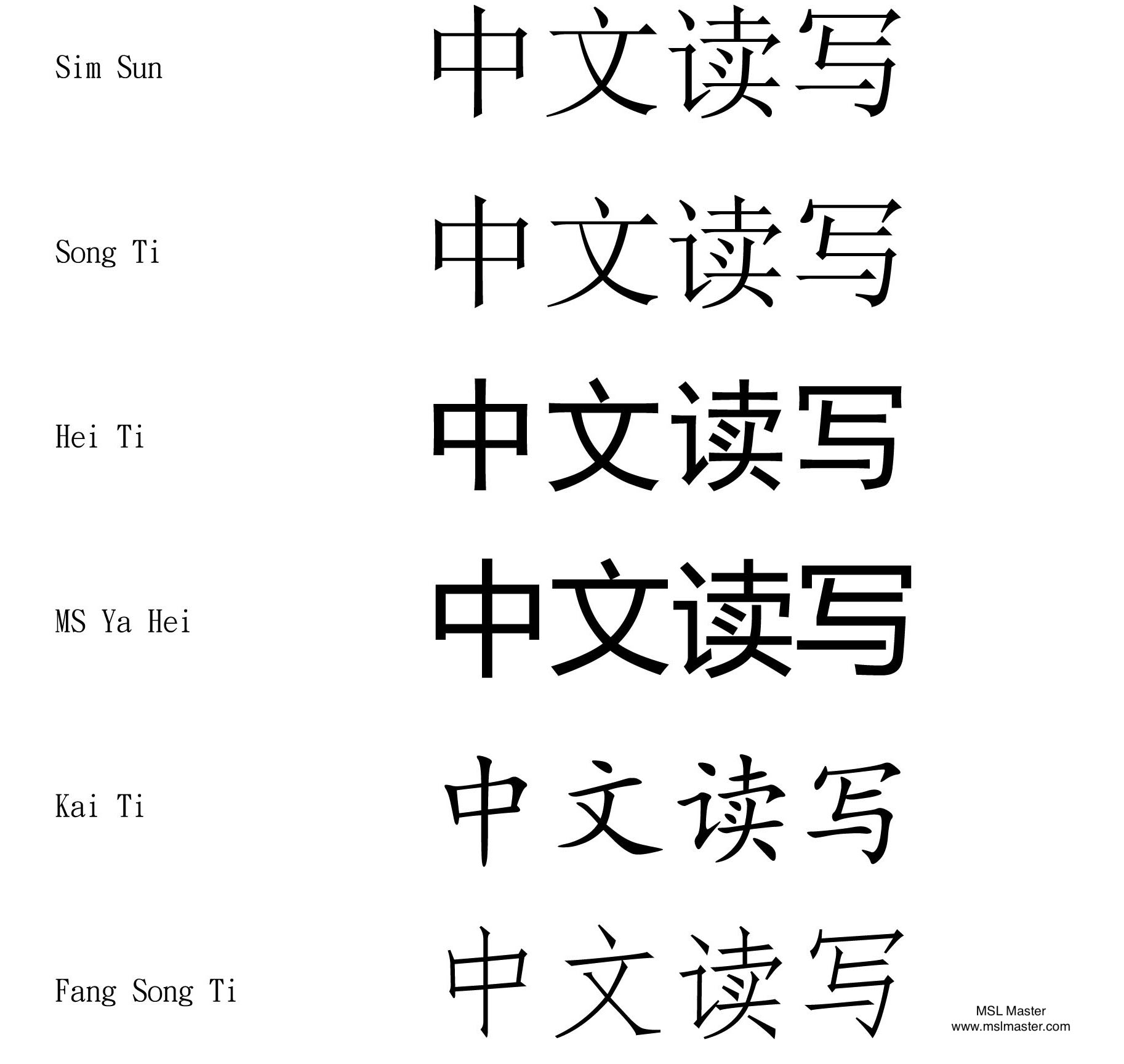 This picture shows what the Chinese title of the Chinese Reading and Writing series looks like in different fonts. My preference goes to Kai Ti.

Moreover, many artists and designers enjoy creating cool looking Chinese characters for logos and signs. Coca Cola’s Chinese logo is often considered a good example of how Chinese characters can look good and at the same time match the English logo.

There are many cool looking Chinese characters used in movie titles, book titles, and posters. Next time you see one, stop for a minute and appreciate.