How to memorise Chinese characters?

When students learn Chinese reading and writing, they must, first of all, memorise Chinese characters.

For Chinese people, such as me, we start this process early. After years and years of copying and writing, we gradually memorise thousands of Chinese characters. Starting young is certainly an advantage. A difficult and repetitious process is dispersed into twelve years of schooling. When we look back, we remember those wonderful days with friends, and forget how long and tedious it takes us to grasp learning and writing Chinese.

But for non-Chinese speakers, who start learning Chinese in their teens or adulthood, the difficulty inherent in the process of memorising Chinese characters is very real. It is something they have to overcome.

Many teachers, including myself, try to gamify (making a game out of studying) this process, and try to make it look easy, such as associating some Chinese characters with a picture or a story, breaking down characters into their components, making some characters into a bingo game, or searching for words in a grid of characters. These educational “games” are very nice and necessary. But they can not replace the hard and studious work students undertake by themselves for the purpose of memorising all the Chinese characters required.

In order to help students have an easier time, or perhaps even some enjoyable time, I put together some strategies dealing with memorising Chinese characters. Students can employ different strategies at different times, improvise their very own strategies, and achieve the best results in the shortest time. It is helpful when students build some of the strategies into their daily routine.

First of all, memorising characters means that students are able to recognise the form of a character, and to pronounce its sound. Or to put it differently, students must associate a visual image with its sound. It is something that all written languages require. The differences are in degrees, not in kind. When I studied English, I had to memorise a set of letters, called the alphabet, and learn how to pronounce them. There are 26 sounds, but there are more than 26 letters. I had to learn which two are the same letters but in different forms, i.e. there is a difference between, for instance, a capital “R” and a lower case “r” in appearance, but they have the same sound. Different from English, Chinese goes a lot further, there are thousands of characters which students must learn to pronounce.

The sounds of 99.99% of Chinese characters are a single-syllable sound. If there is one unique sound associated with each Chinese character, would it be easier to memorise? Are human beings capable of making thousands of different unique single-syllable sounds? Anyway, it is not the case. Compared to the number of characters in Chinese, there are only a limited number of sounds available. Even the number of sound is multiplied by four (tones), the total number of sounds is still not enough to cover thousands of characters. The result is that many different characters have the exact same sounds. This is the reason that studying Chinese through pinyin is not sustainable. Very quickly, students get confused by the same pinyin having so many different meanings. Most Chinese characters have only one sound. However, there are some have multiple sounds, with each sound associated with a different meaning. How to pronounce these characters and what meanings they carry can only be decided by looking at characters either before or after. For example, 了 has different sounds and meanings in 吃了 and 了解. On the other hand, some Chinese characters have multiple sounds, but all sounds with the same meaning. This is not shocking to English speakers though, as they also face different pronunciations with the same word, such as  “tomato”. Similar to English, it is a regional preferences, or due to different combinations of words. In Mandarin Express Intro Level B, I listed two pronunciations for 谁. And there are other characters, such as 亚, which can be read in either the fourth tone or the third tone.

From this analysis, we understand that any strategies of memorising Chinese characters must involve both sound and form at the same time.

Secondly, students must know a Chinese character’s meaning. In this aspect, Chinese language is a difference in kind from many other languages. In English, each letter, when standing alone, does not convey any inherent meaning. But each Chinese character does, and the challenging part is most characters carry multiple meanings. Some characters have twenty meanings, while some others two or three. The exact meaning of a character depends on other characters either before it or after it. For example, 花样, 红花 and 花钱, all have the same character 花, but this character tells us completely different messages through different words. How can we know the meaning of character 花 when it is standing alone? The answer is “we can’t”. We could put forward some possibilities that it could be “pattern”, “flower”, or “to spend”. we are only sure of its meaning when it is combined with other characters. 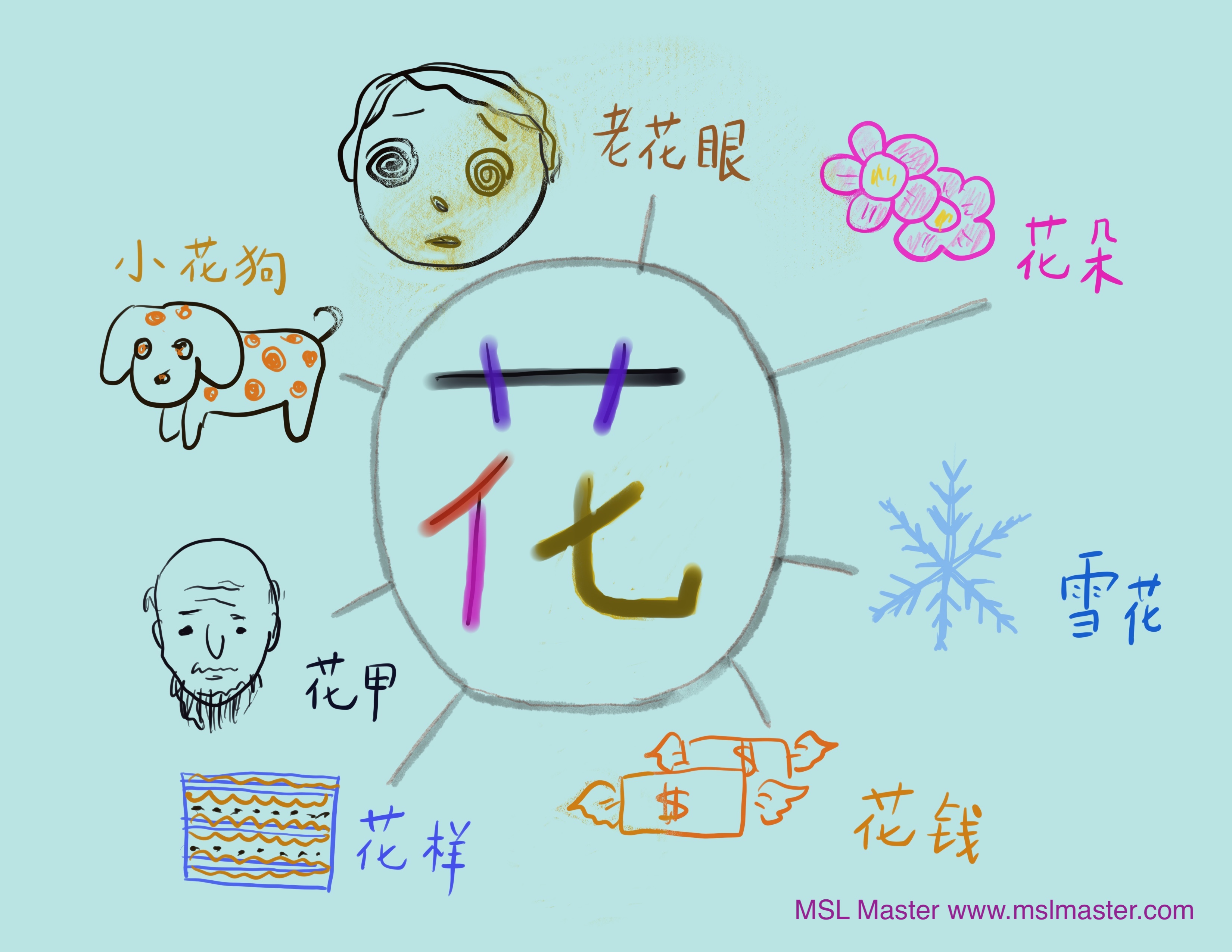 However, there are some technical difficulties because there are just way too many words! Most students have to depend on teachers or textbooks to index these words to much smaller and manageable pools. For beginner students, the pool must be tiny. In Chinese Reading and Writing 1, there is a miniature pool of words made with 70 Chinese characters. As students progress and their reading and writing ability grows, the pools get bigger and bigger.

Thirdly, memorising a Chinese character means, said by many teachers, students and textbooks, that students are able to write this character from memory. I think it is a misleading term. It implies that students remember what a character looks like and reproduce this character according to an image in their brain. In reality, it is really the hand, not the brain, which is doing the writing. We only need to know what we want to write, and our hands will write them. Any moment we have to pause and think what a character looks like, we are in trouble. And very likely, we won’t be able to write it. This phenomenon is so common for people who are out of practice writing Chinese characters, there is even an expression for it: 提笔忘字.

Indeed, our brains are not entirely reliable. It is common that we remembered something completely wrong. However, our hands are much better. It has been proven, for example musicians, that our hands are capable of memorising complex forms and movements. Thousands of Chinese characters are no exceptions. Memorising by hand means to establish accurate muscle memories. Students must practice writing many times so that their hands can be trained.

Now, we can summarise that memorising characters must involve the following:

Strategy #1: Copy a word, while reading it aloud.

Strategy #2: Copy a word, while reading it silently.

Strategy #3: Listen to a word, while reading it aloud.

Strategy #4: Listen to a word, while reading it silently.

Strategy #5: Copy a few words three or four times first, then try to write them without looking.

Strategy #6: Build up a collection of flash cards of words, and read them aloud.

Strategy #7: Read a deck of flash cards of words silently.

A few words here to explain the last strategy. If there is a novel, an article, a story or a poem that students like, they can copy the entire Chinese text. This will take them out from the limitation of words. And it is also more interesting when they write something they like. As they will be copying a large number of texts. Gradually they will have a solid base of Chinese characters, words, and structures.

After a long time of studying English, I became literate in a second language. It opened up a new world for me. The same goes to all students who are learning Chinese, that becoming literate in Chinese offers a rare privilege to see and to experience a different world. Chinese, as the oldest and a still living language, is worth learning.