Thousands of years ago, ancient Chinese used soft lines to outline a rough shape of things. These lines became pictographic characters. When I looked at those ancient scripts, I felt that I was indeed looking at pictures. 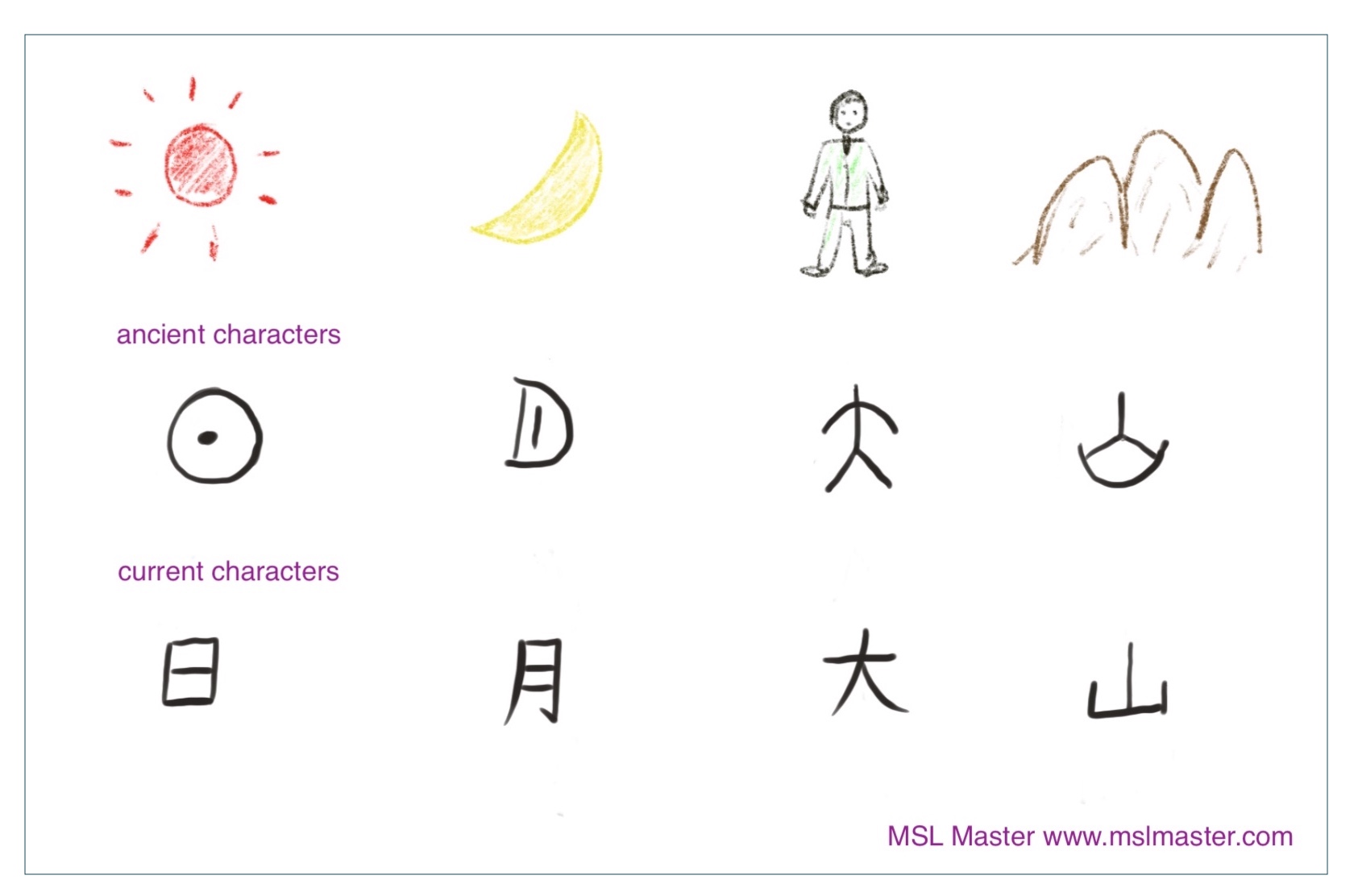 But, even these ancient scripts are not pictures.

Pictures are unique and different. Different people draw the same object differently. If one thousand people draw a person, we will see one thousand different renditions of a person. But characters must stay consistent. If one thousand people write the character “大”, we will see the same character a thousand times. These ancient scripts have been very stable and consistent. When ancient Chinese carved these scripts into turtle shells or oracle bones, they had to make sure that these scripts were standardised and intelligible. They were definitely not drawing pictures.

In fact, to use pictures to interpret Chinese characters can be counterintuitive.  Many times pictures tell different meanings from what Chinese characters were invented for. If I did not learn Chinese and I find that the image of a person standing upright became a character “大”, I would have thought this character must mean “person”, because that is how I, and many other people, draw a person using simple lines, similar to playing a hangman game. Unfortunately it is not correct. The basic meaning of this character “大” is big. How a standing upright person turned into “big” is anyone’s interpretation.

A “person” in ancient scripts looks quite different. 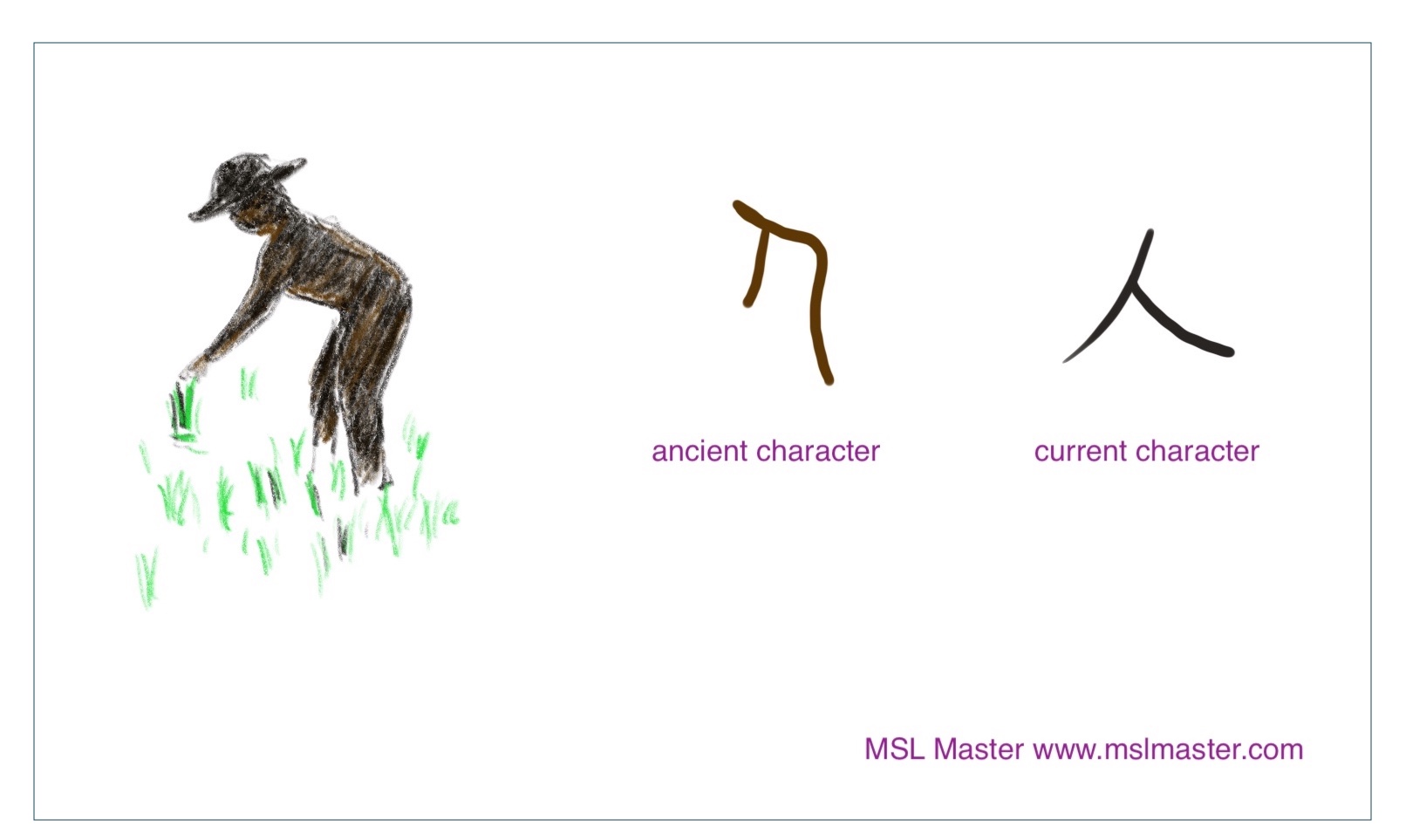 For me, the immediate impression of this ancient Chinese character is a person bending down working in a field, a working peasant. Others think differently. If you search on the internet, you can see a few different picture-interpretations of this ancient script, such as a person bowing, or a person extending one hand out ready for a handshake.

The ancient character “person” has changed over time, from a bending down peasant into a walking person, which means we need a different picture to illustrate the character “人” we use now. 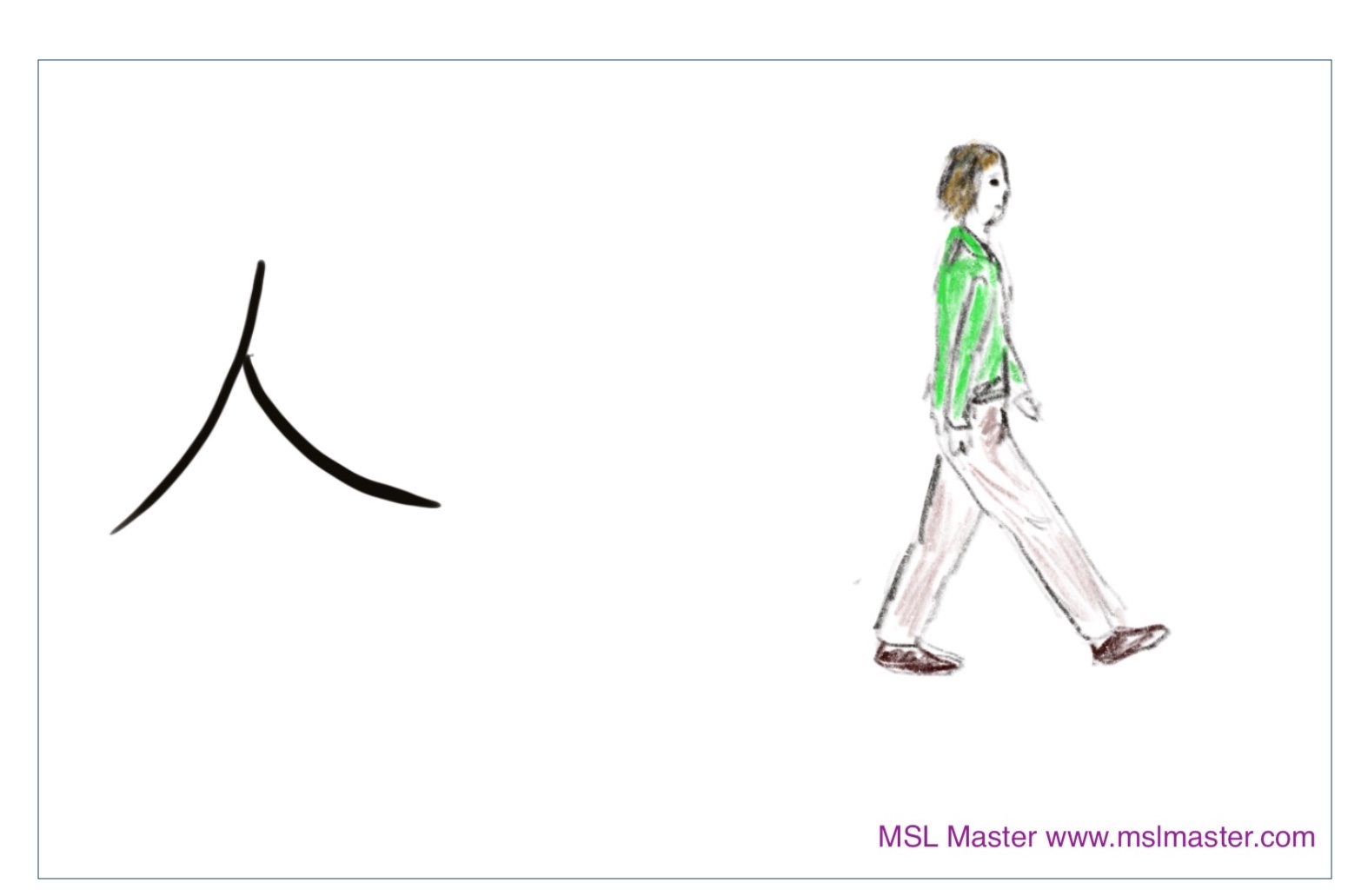 But there is a problem that the same picture looks so much like another character “入”, which looks like a direct descendant from the ancient script “人”. Shall we say, more “person” than “person” itself! 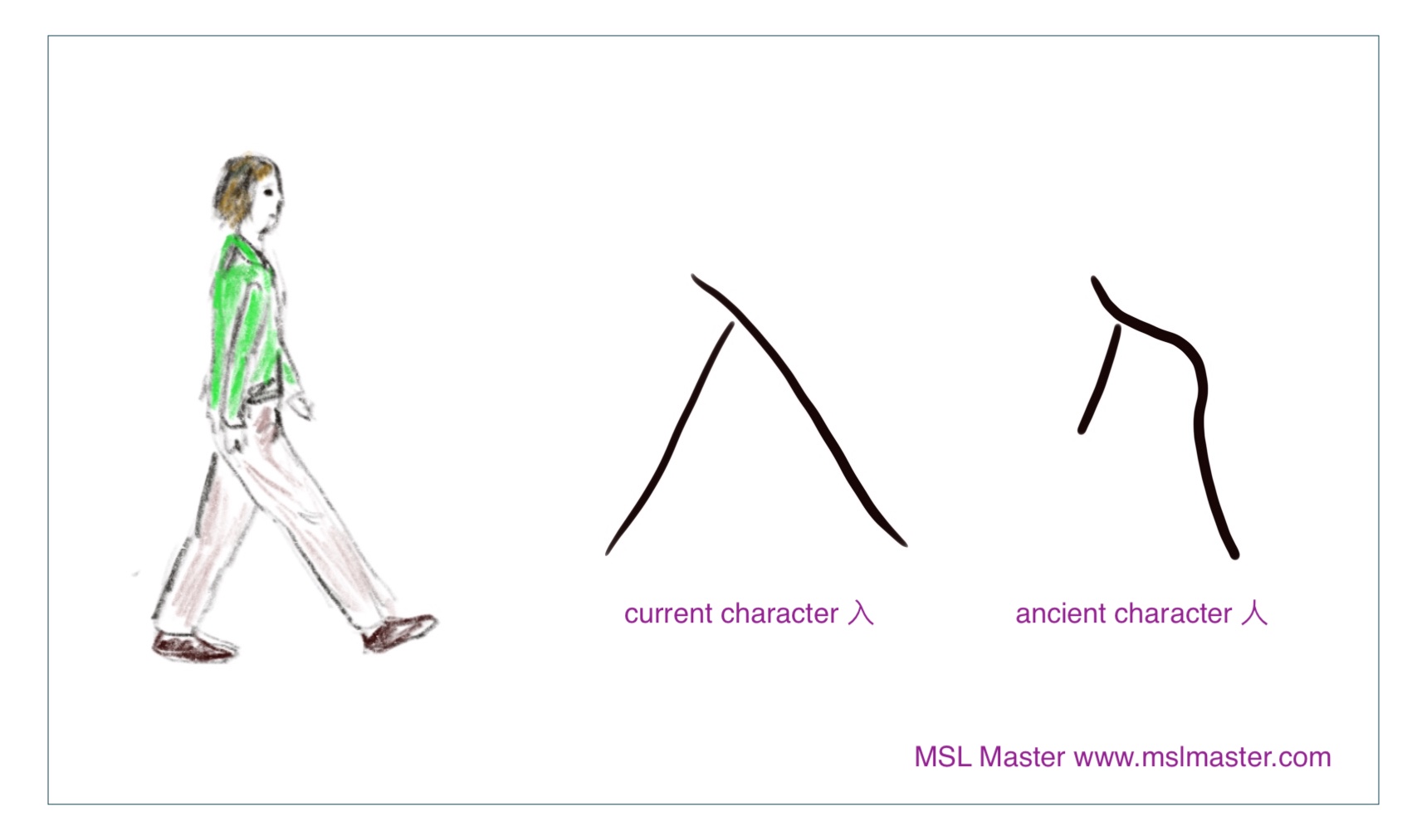 It is fun and interesting to know a little bit about the origins of Chinese characters, but endlessly explaining Chinese characters through pictures seems to me a departure from the core of teaching Chinese reading and writing, especially when the goal is to become literate in Chinese as efficient as possible.

Moreover, using pictures to illustrate Chinese characters may cause misconceptions. While the picture can magnify one meaning of the character, it also covers up many other meanings. For example, if I used a picture of the sun to illustrate the character “日”, this would drive into students’ mind that this character means the sun. However, nowadays we usually use “太阳” for the sun, and use “日” to express other messages, such as “day”, “life”, “time”, which the picture of the sun can not convey immediately.

There are about 300 pictographic characters in total. Many of them have gradually changed meanings. And many are no longer in active use.

If I had selected 300 pictographic characters in Chinese Reading and Writing series, I could have filled the books with pages and pages of beautiful pictures. But I would not be able to write a coherent story with them. Right now, the complete series is filled with pages and pages of Chinese texts, sentences, conversations and narratives, all written with 320 Chinese characters, which come from all four different groups.

Many things are hard to draw, and ancient Chinese figured out that they could use some symbols to indicate the meanings. Thus, they created indicative characters. 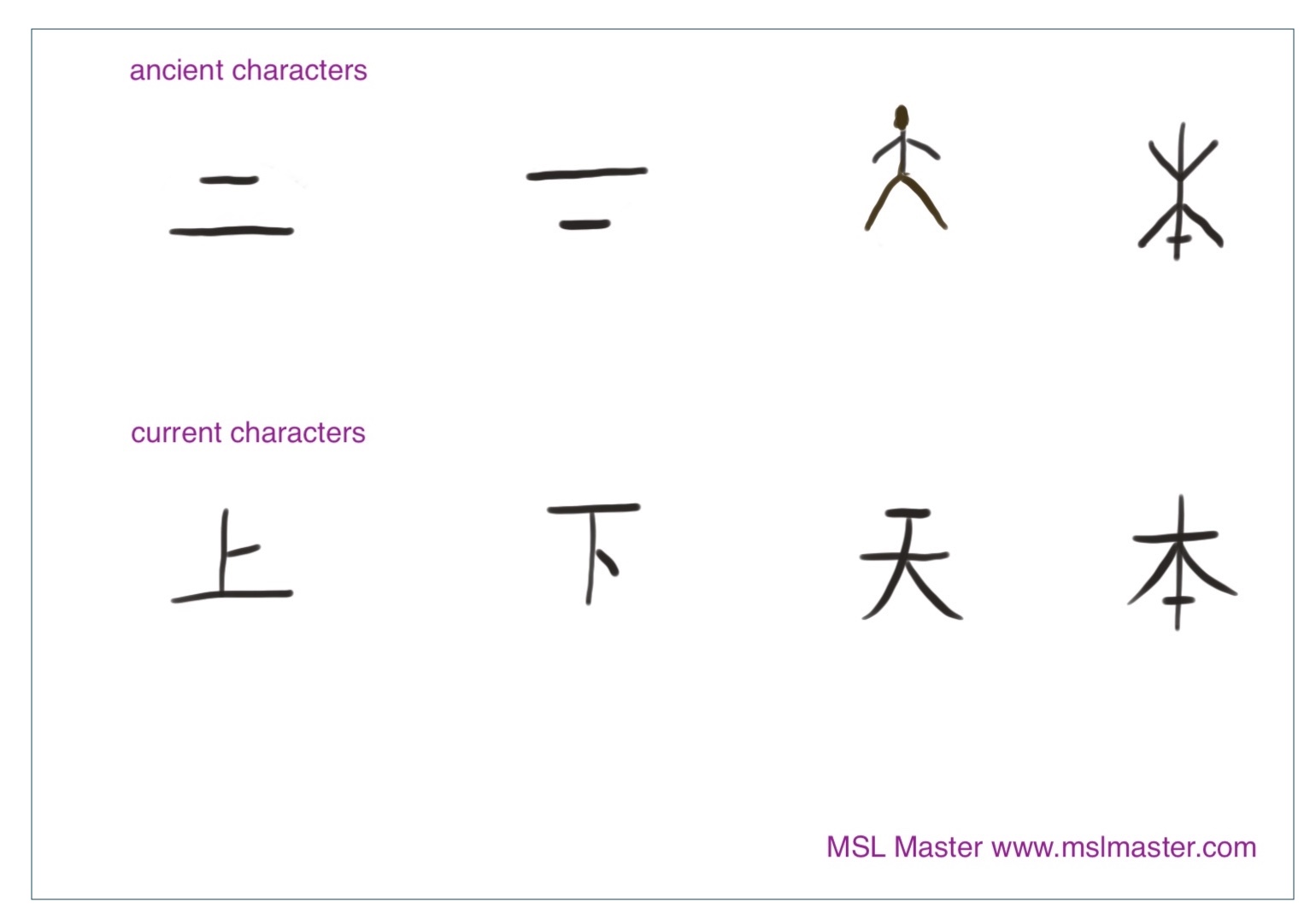 What ancient Chinese created here is even further removed from drawing pictures. We see the standing person appeared again, with a head this time. But this character does not mean “head”. That dot, where the head is, indicates the sky.

For people who do not know, these four characters, from left to right, mean: above, below, sky, fundamental. It is quite impossible to use pictures to illustrate these characters. Ancient Chinese did as best as they could, and also made these Chinese characters as simple as possible.

There are not many indicative characters in Chinese, only about 20 of them.

Ancient Chinese put two or more symbols together and created associative characters to describe more complicated or abstract concepts, such as an action or a process. 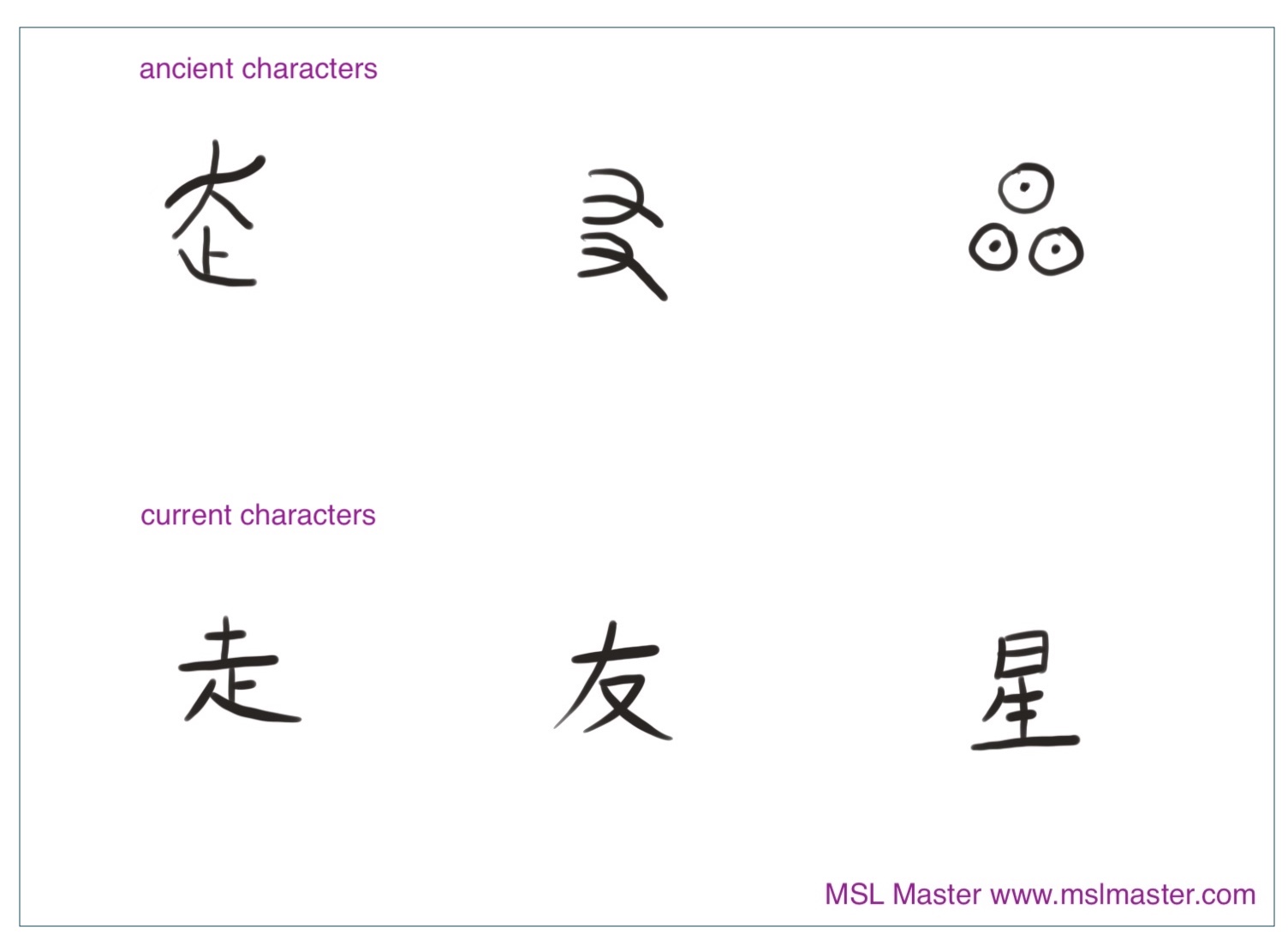 The first one is a running person on top of a foot, that is “走”, originally means “to run”. The second one shows two hands together, that became “友”, friend or friendship. The third one shows three suns together, that became “星”,  stars. Again, we have to be taught to understand. Otherwise, I would not understand the first character, and thought the second one means forks, and the third one three eyes, maybe a monster?

There are about 500 associative characters. They demonstrated that ancient Chinese were very flexible and creative.

There must have been a point when ancient Chinese had a breakthrough in creating new Chinese characters. They were no longer limited by the shape of things, or arranging symbols to indicate meanings. They invented a kind of analytical characters, with one component giving indication to the sound, while the other component gives some hint on meaning. 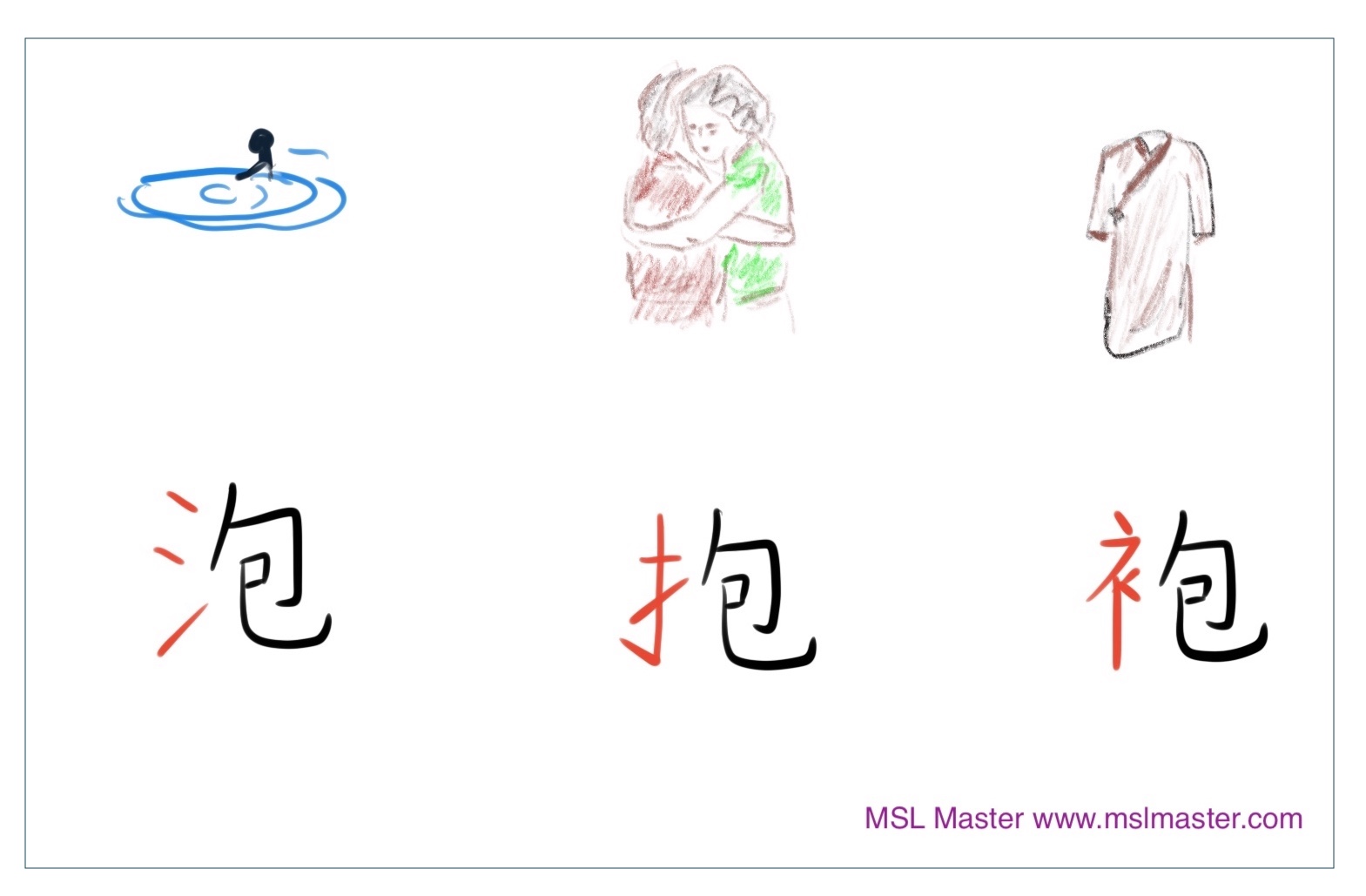 This is the majority of Chinese characters. There are about 5000 of them. Again, we have to be taught to understand the link between the pictures and the characters. Otherwise we won’t be able to decipher the meaning of characters based on the pictures trying to illustrate them.

These four categories of Chinese characters and the way to illustrate them are quite common among textbooks. And many teachers rely etymology and history to explain and illustrate Chinese characters. However, etymology and history can also constrain teachers from using pictures freely if they prefer to stay true to their knowledge of characters and stay consistent with the meanings of different components. For example, “口” will always be a mouth, and “日” always the sun. Different from this old school thinking, there are some thinking-outside-of-the-box teachers came up with a completely different type of pictures to illustrate Chinese characters. These teachers disregard what a character or a component means. All they want to achieve is to make the character part of a picture. 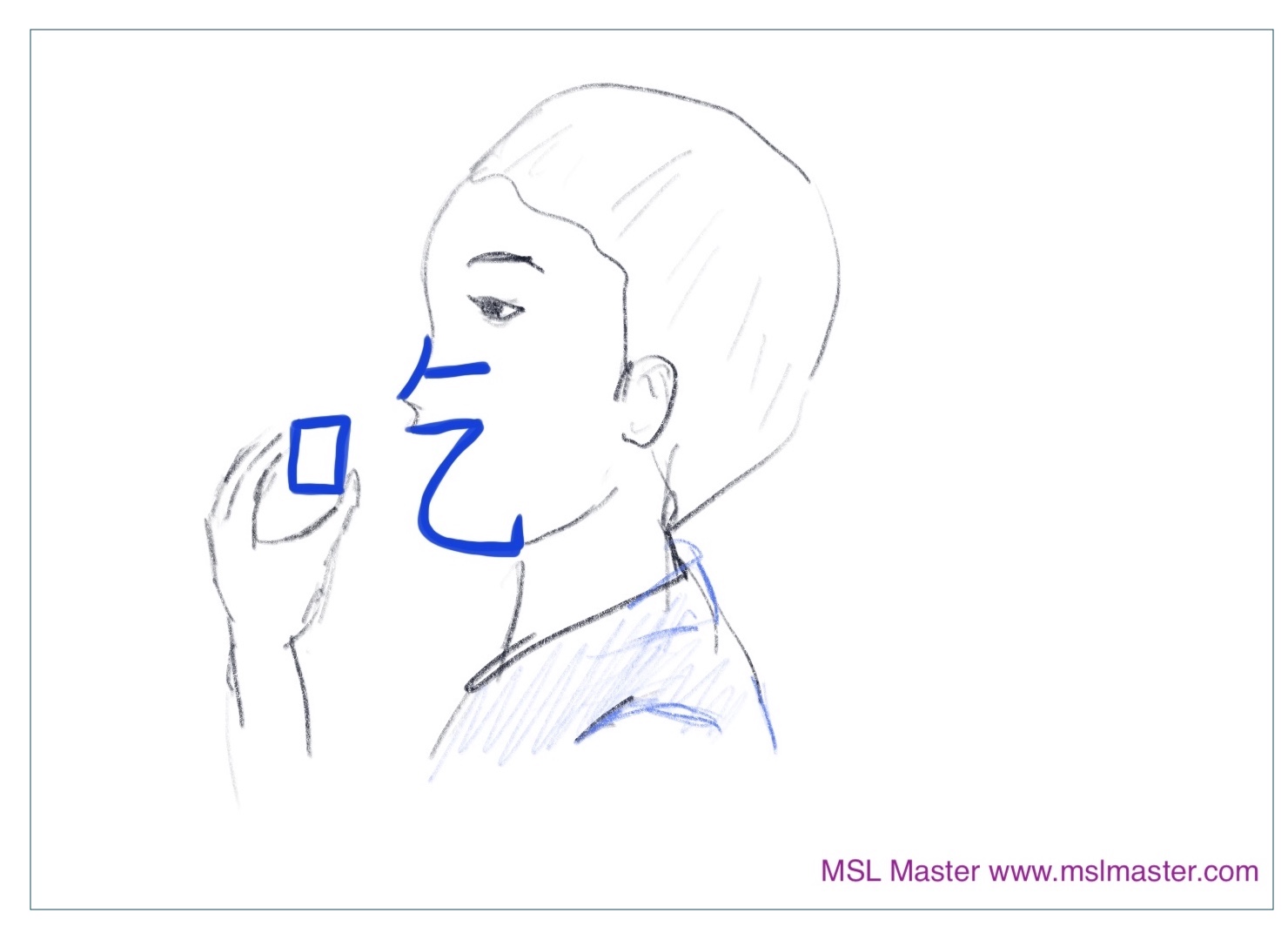 In this picture, the mouth component “口”, became the food. The component “乞”, which means “to beg”, became part of the face. 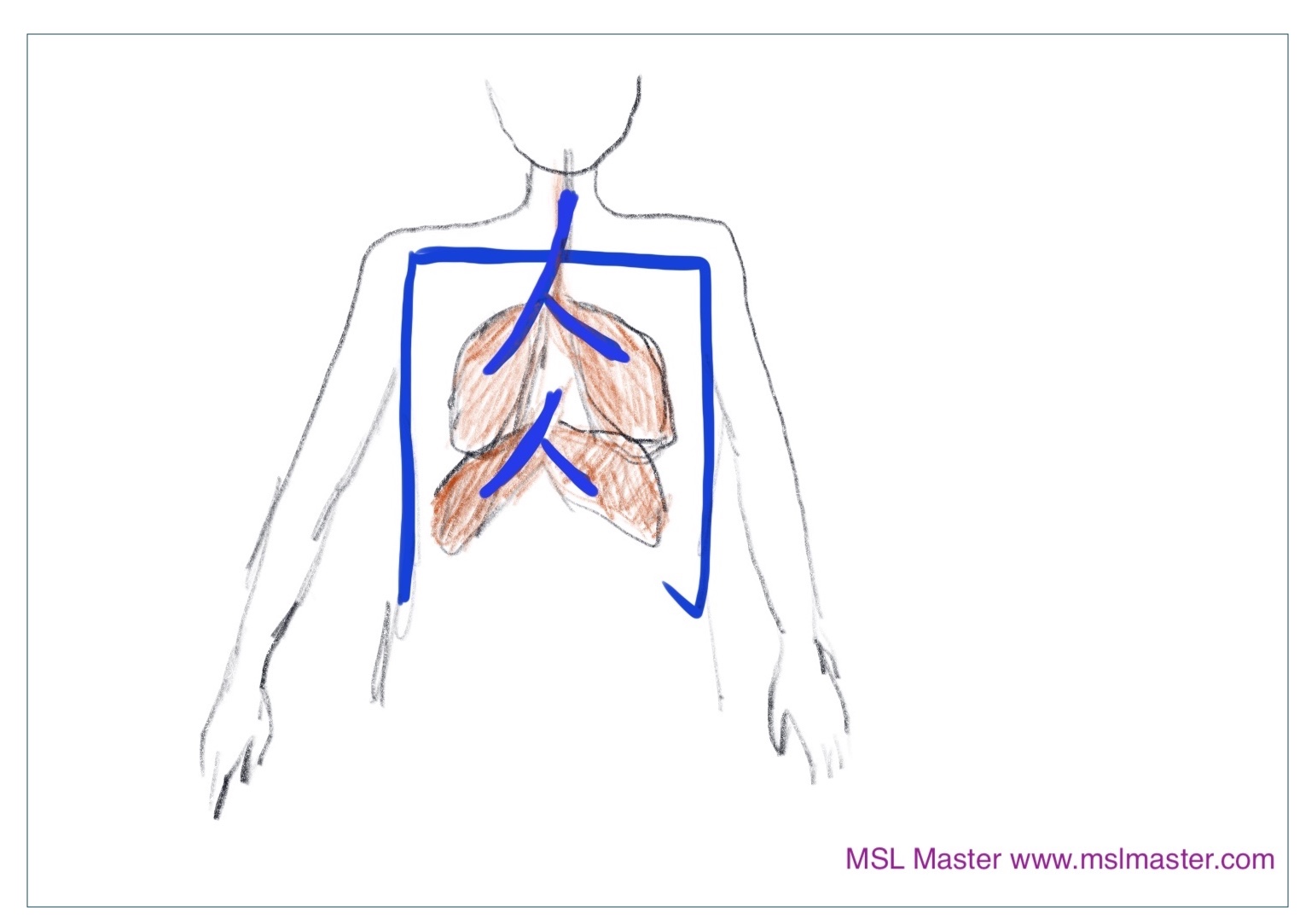 In this picture, the character meat “肉” was turned into a body with organs.

This type of pictures are creative and interesting at the expense of distorting the characters completely. Ancient Chinese would have rolled in their graves if they saw them.