There are many arguments for learning Mandarin. Some are extremely good, while some don’t really hold. Below is my top ten.

#10 Learning Mandarin enables a speaker to communicate with more than one billion Chinese people.

This is one of the most frequently used, and yet the least convincing argument. The truth is that, when it comes to choose a new language to learn, the size of the population who speaks the language is irrelevant.

According to the world population rank 2019, the ten most populated countries are: 1) China, 2) India, 3) the US, 4) Indonesia, 5) Brazil, 6) Pakistan, 7) Nigeria, 8) Bangladesh, 9) Russia and 10) Japan. Given the historical background, English is widely used in India, the US, Pakistan, Nigeria, and Bangladesh. That leaves Chinese, Indonesian, Brazilian, Russian and Japanese people speaking a different language other than English.

If picking a second language is correlated with the size of the population, the number one choice should be Chinese, followed by Indonesian, Portuguese, Russian, and the last one is Japanese.

However, it is not the case. The Modern Language Association of America (MLA) conducts regular surveys of language enrolment at universities in the US. In the 2016 survey, we find that, Japanese ranked number one, followed by Chinese, Russian and Portuguese. Indonesian does not even make to the table. 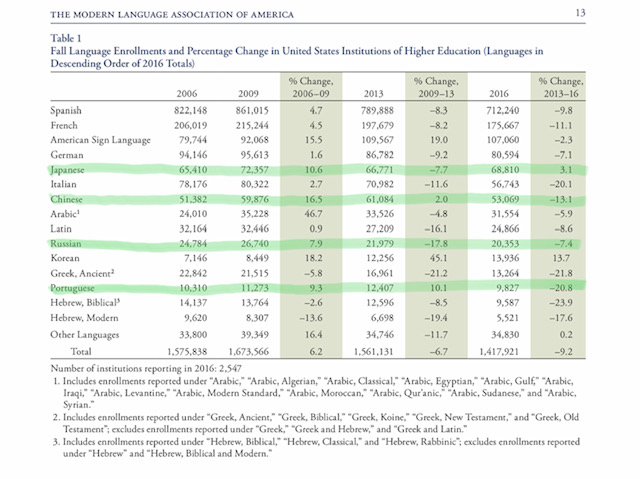 This table also shows that, Chinese suffered a 13% decline in popularity, which the size of Chinese population can not explain.

Moreover, this argument implies that languages spoken by a small number of people are not as important. Many people will not like this idea.

#9 Due to the economic rise of China, learning Mandarin gives a speaker an unparalleled advantage in the global job market.

This is another frequently used argument, that China has an increasing influence in every aspect of business, and is perceived soon to be the largest economy, therefore, there is an increasing demand for people with Chinese language skills.

Many people support this idea, such as the former British Prime Minister David Cameron. In 2013 after his visit to China, Cameron said, “By the time the children born today leave school, China is set to be the world’s largest economy. So it’s time to look beyond the traditional focus on French and German and get many more children learning Mandarin.”

I reckon China’s rapid development in the past decades did put Mandarin as a viable second language option, but at the same time, many students soon came to a devastating conclusion that Mandarin is too difficult to master, and Chinese people’s English is far better than vice versa. Therefore, in the global job market, in terms of English and Mandarin, foreign students are competing with millions of Chinese students who have good enough English and super good Mandarin.

This argument also calls for a counter argument, that China’s hyper growth is probably over, what is the reason to learn Mandarin now?

As much as I want to see a rapid rise of learning Mandarin worldwide, I don’t feel too good about using future job opportunities as the bait.

#8 Mandarin is not hard to learn.

First of all, people don’t choose to do something because it is easy. Secondly, this argument is not true.

Many people compare Mandarin with most European languages and highlight that Mandarin is easy because it does not have tenses or genders. Verbs do not have conjugations. And Chinese grammar is very simple. They usually brush over the only difficult thing which is the Chinese writing system.

My take is that, besides the Chinese writing system being very difficult, the easy grammar and the absence of tenses do not make learning Mandarin easier.

When people grew up speaking a language with meticulous grammar points and tenses, it is actually easier for them to pick up another one with similar features. I have met so many students who are fluent in multiple languages, such as English, Spanish, French, or German. But when learning Mandarin, they have to do some major adjustments. For example, there is no past tense in Mandarin. Many students find it difficult to grasp. They love a clear and stable indicator of past tense. Unfortunately, some misinformation is flowing around, which tells students that the character “了” is the past tense.

Moreover, the sound system is also difficult. Mandarin has a very limited pool of sounds, which lead to the fact that everything sounds so similar.

According to studies, this is true, but so do other languages. Take a look at the following articles.

Learn another language and keep your brain fit (Irish Times)

I am not sure whether learning Mandarin is better for brain health than learning other languages.

#6 Learning Mandarin is a way to learn about Chinese culture.

This argument is a good one if we do not limit Chinese culture within a small number of ancient Chinese relics and some exotic aspects. For example, I once read that, through learning Mandarin, students can embrace Chinese meditation and herbal healing on a personal level. I find it hard to believe.

#5 Speaking Mandarin makes it easier to travel around the China.

Some abilities in reading and speaking Mandarin will make a huge difference when travelling through the many incredible cities in China.

#4 Learning Mandarin makes it possible to either connect with family members or keep them away.

This argument is a compelling one for studying Mandarin. I have heard three different scenarios.

1) My wife or husband is Chinese, and I need Mandarin to communicate with my in-laws.

2) My children are learning Mandarin at school. I must take some Mandarin lessons just to keep up with them.

3) I speak Mandarin with my twin brother/sister. So nobody can eavesdrop on us in the house.

#3 Learning Mandarin is beneficial at work.

This is a great argument for people who are sent by their companies to do business with Chinese, or for those who start their own business in China. It is definitely an advantage to be equipped with some Mandarin skills. Otherwise they have to rely completely on translators, and constantly feel they are left in the dark.

#2 Learning Mandarin is a way to be intellectually challenged.

This is a great reason to learn Mandarin, especially for those who start learning late in life, when everything is easy and comfortable. The oldest student I have ever had was 71 years old, running a successful business. Learning Mandarin definitely puts him back into square one.

For people like him, they will have to overcome some negative comments from friends and families, such as, “What is the use of it? You don’t need it at work” or “You will forget the next day. What a waste of time”.

It is truly incredible that these comments do not deter them from taking the next challenge.

This is the ultimate argument for learning Mandarin. There are no ulterior motives, only one single and sublime idea which is pure and transcending. It is the “egg philosophy”.

Learning Chinese is stressful, if we learn for parents or for a job.

Learning Chinese is self-realisation, if we learn for interests or for growth.