Chinese characters can be deconstructed by strokes, components or radicals. Strokes are the most basic components of all Chinese characters, the first step for all students to learn how to write Chinese. Components and radicals are two different concepts. It is beneficial to understand what they are, especially some facts about radicals.

For deconstructing Chinese texts, we can only do it based on words.

On the surface, Chinese is written using individual characters. But, if we treat a sentence as a sequence of Chinese characters, we may not understand what this sentence is telling us. The main reason is that Chinese texts do not provide spaces for word boundaries. People must be trained to pick out the words by themselves.

Let’s use English as an analogy to make this point clearer. English is written using individual letters. If English were written as Chinese is written, a typical sentence will look like this:

To understand this sentence, we must, first of all, group letters into words. Fortunately, this is not how English is written. There are spaces conveniently provided between words, such as in this article.

Take a look at this example: 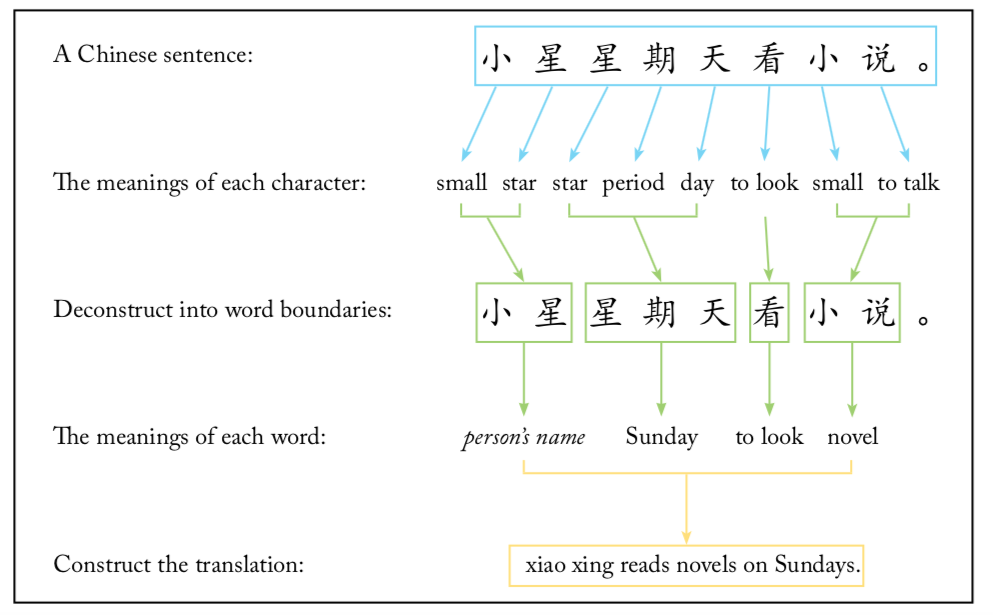 To deconstruct longer sentences requires more practice, especially when there are names and fixed expressions and structures in place.

Apart from learning individual Chinese characters, students must develop this deconstruction ability in learning how to read Chinese texts.

When word boundaries are drawn differently

Word boundaries can be drawn differently and create different meanings. It is probably something that only Chinese can do, and there are funny stories to play around this idea.

One of them goes like this. A guest was visiting an acquaintance. When it was time for the guest to leave, it started to rain heavily. The guest did not want to rush home in a rainy day, and the master did not want to ask the guest to stay any longer. The master thought of a polite way to ask the guest to leave. He wrote something on a piece of paper and handed it to the guest. It was “下雨天留客天留我不留”. What the master intended to say is, with some punctuation helping us drawing word boundaries, “下雨天，留客。天留，我不留。” After reading the note, the guest smiled and thanked the master for asking him to stay. For the same note, the guest’s interpretation is “下雨天，留客天。留我不？留！”

It also shows how important punctuation is. Imagine the time before punctuation was introduced to Chinese language!

Learning Chinese reading and writing is more than learning a string of Chinese characters. For beginner students, they must go through extensive training to develop their ability in deconstructing Chinese texts. And it is better accomplished when the total number of the Chinese characters is under control. The idea is that, when all the characters are known, students can focus on comprehending the meaning of the texts.

With a gradual rise of difficulty and complexity of Chinese texts, the entire series emphasises the importance of learning how to read and write Chinese texts, not just Chinese characters, and provides sufficient opportunities for students to practice.